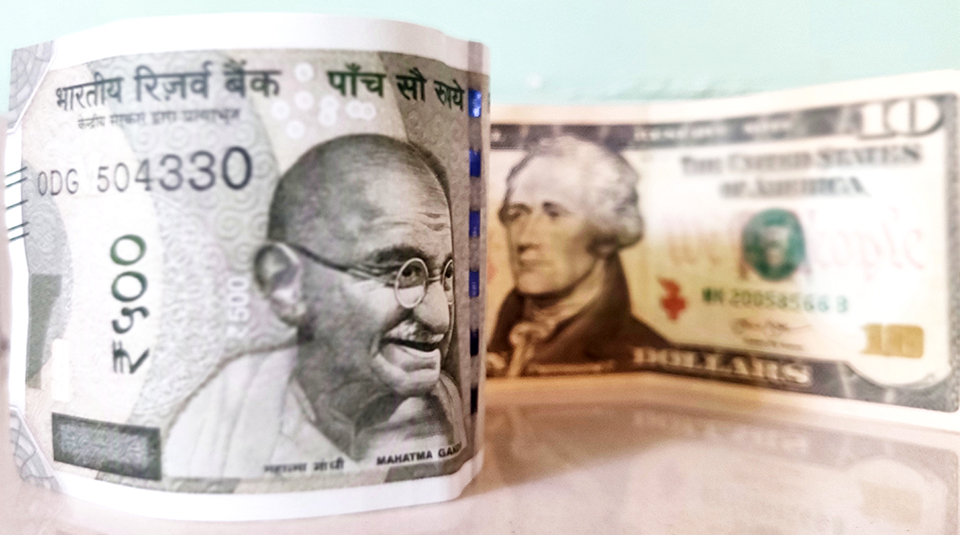 India traditionally has been net-importer of goods and services. It has been balancing its foreign exchange trade deficit by attracting capital flows. India’s high GDP growth rate and demographic dividend story has attracted lots of foreign investments as well which has helped it amass large foreign exchange reserves over the years. 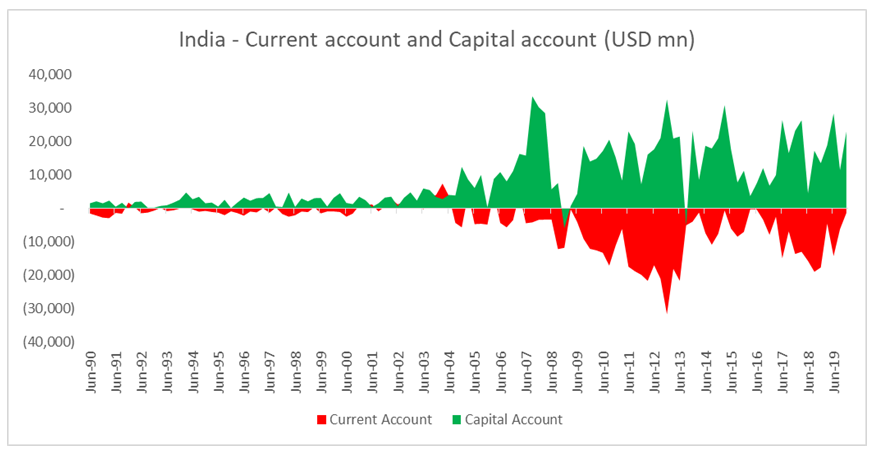 Only time when India had seen positive current account balance (on a consistent basis) was between 2001 and 2004. This is when India’s services exports (IT exports) were growing at rapid pace. 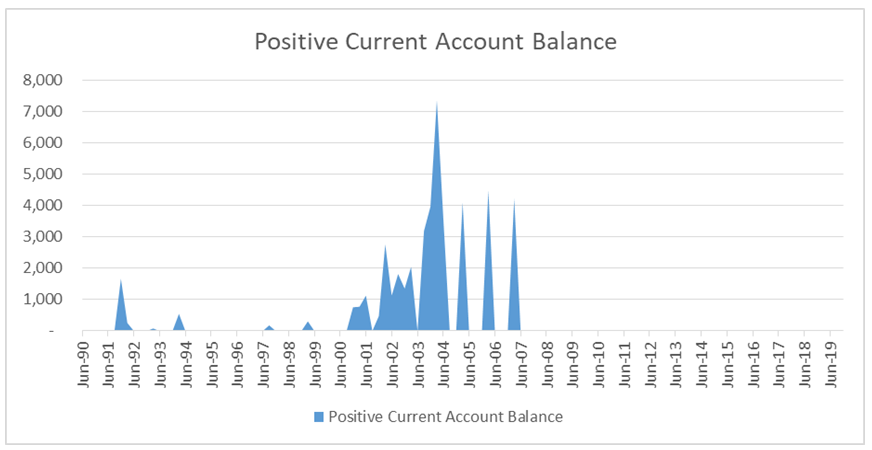 Rest of the time, India has remained net importer of goods and services which was funded by attracting foreign capital.
There are no prizes for guessing that India’s Balance of Payment and USD-INR rates are highly related. Below chart suggests when Balance of Payments was positive (i.e. net forex inflows) INR has seen appreciation and vice versa. 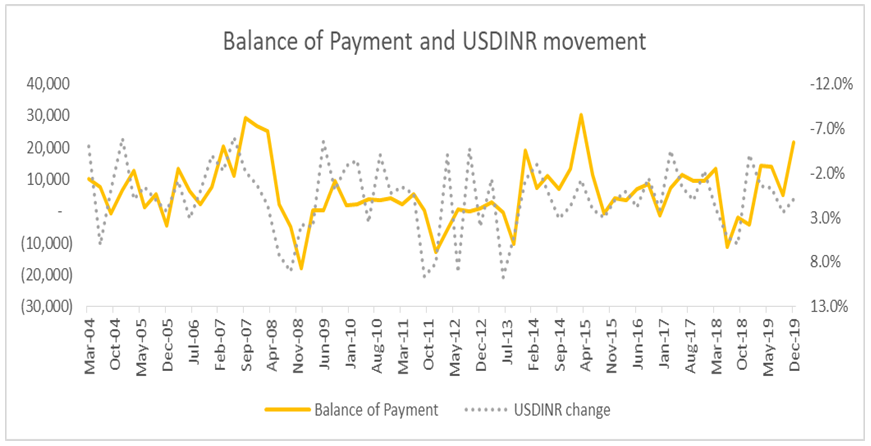 Over short term, trade balance & current account, can have an impact on USD-INR movement. However, based on above, we can say that INR movement over longer term is largely dependent upon levels of capital inflows.

Thus, when we are talking about global US$ shortage and structural issues with Eurodollar bond markets, it becomes important to understand where India stands currently with respect to its foreign exchange position.

What does indicators say currently? 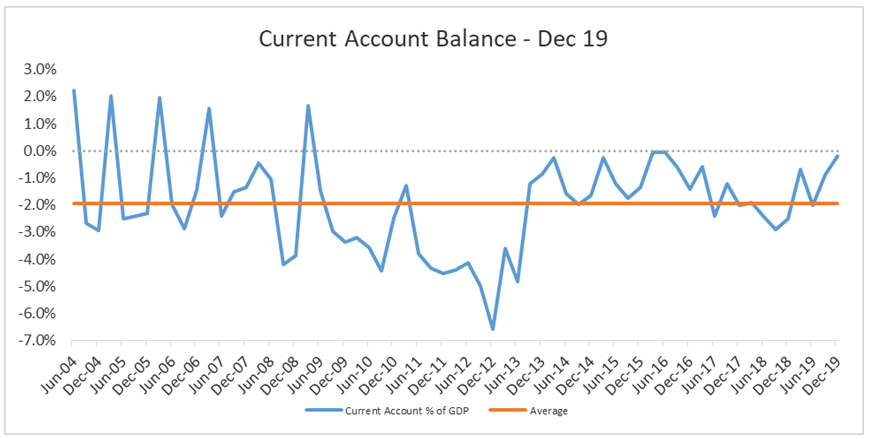 With slowing global and Indian economy, the deficit appears to have shrunk. India’s services exports continued to earn at its regular monthly rate during March-20 at least. This has resulted in net trade and services deficit to decrease to less than $3 bn a month from a peak of $ 11 bn a month. This has led to lower foreign exchange outflows from India on account of trade. 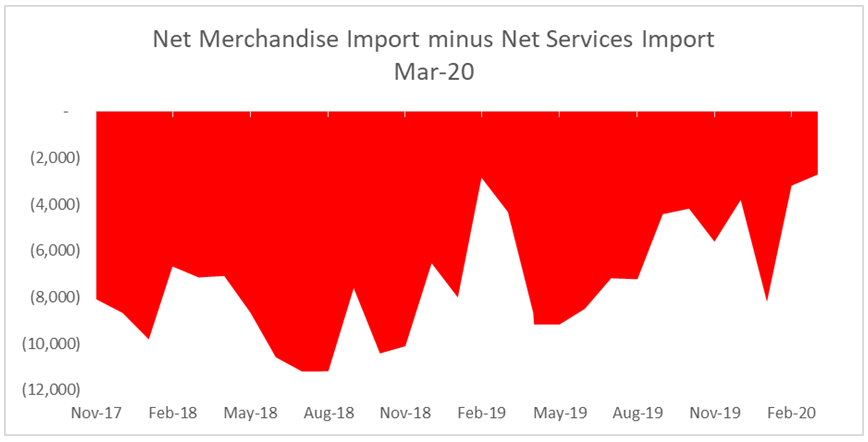 We will need to see if services exports can sustain the momentum going forward in slowing global GDP and help keep current account deficit lower.

Capital flows into India have primarily been by way of Foreign Direct Investments (FDI), Foreign Portfolio Investments (FPI), Deposits by Non-Resident Indians (NRI deposits), etc. Prevailing interest rates and GDP growth rates can have a major impact on these flows. 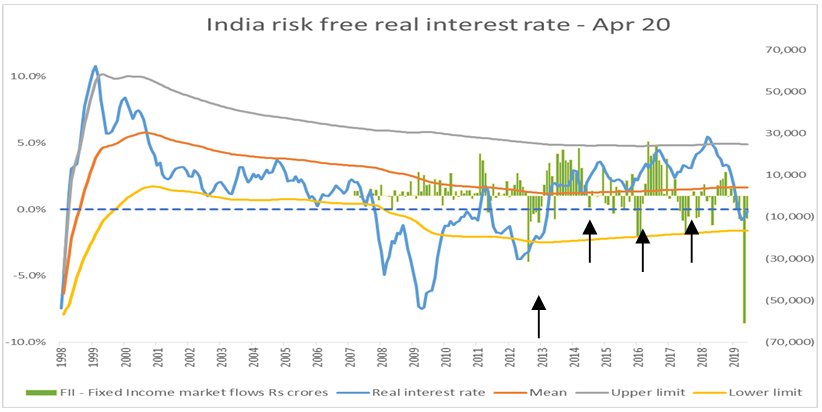 Foreign flows into India’s equity (cash) markets have also remained negative / low. In low growth world (at least over shorter term), one must consider how attractive India is for foreign investors. 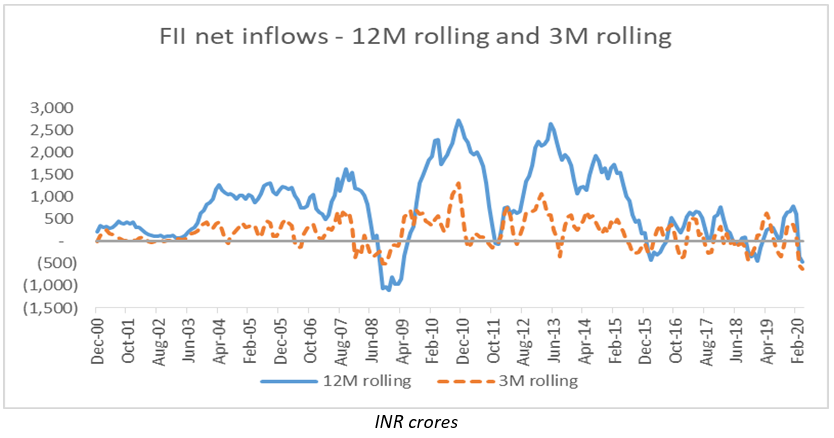 S&P 500 vs. MSCI Emerging Markets also suggests continued strength, suggesting preference for developed market equities over emerging ones for the time being. This can continue to result in sluggish FPI flows into India.

Deposits by non-resident Indians has been a major source of foreign exchange inflows for India over years. We can see higher cumulative flows in QE era. While QE continues, it remains to be seen if NRI flows would be adequate to fill the gap for lower FII inflows, especially with negative real interest rates. 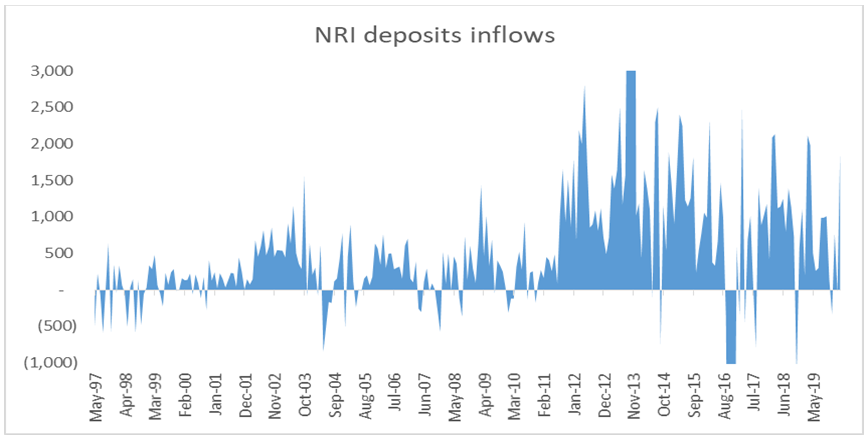 India had been a beneficiary in QE era with rising FDI. It remains to be seen if risk taking by Private Equity, Venture Capital funds and global MNCs remains at as elevated a level going forward, especially if we are looking at a low growth world for the time being.

Though on a flip side, there are opportunities to attract FDI considering world is looking to diversify its supply chain away from China. 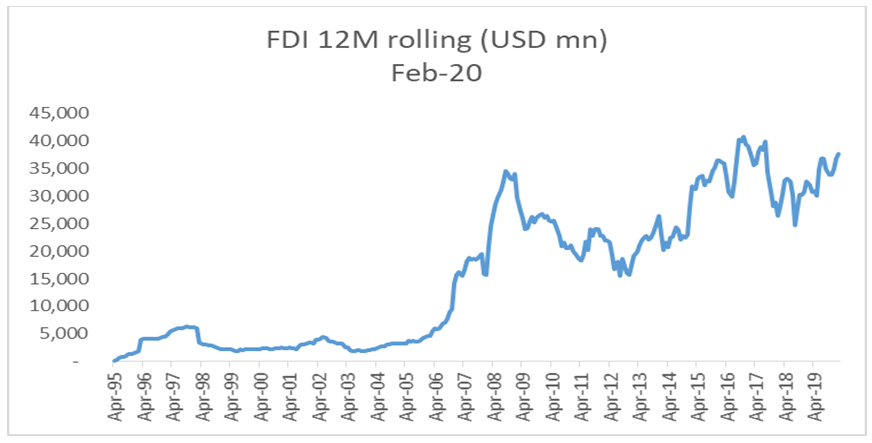 Overall, there is nothing to suggest that what we have seen in last 40 years to change. At structural level, INR remains a depreciating currency.

How comfortable is India’s forex position as of now?

India’s forex reserves have remained steady at ~$485 bn. Thus far, it has managed to escape a plunge in foreign exchange reserves despite capital flight (FII). Lower oil prices have come to India’s rescue with India’s oil basket price declining to $20 per barrel for Apr-20. 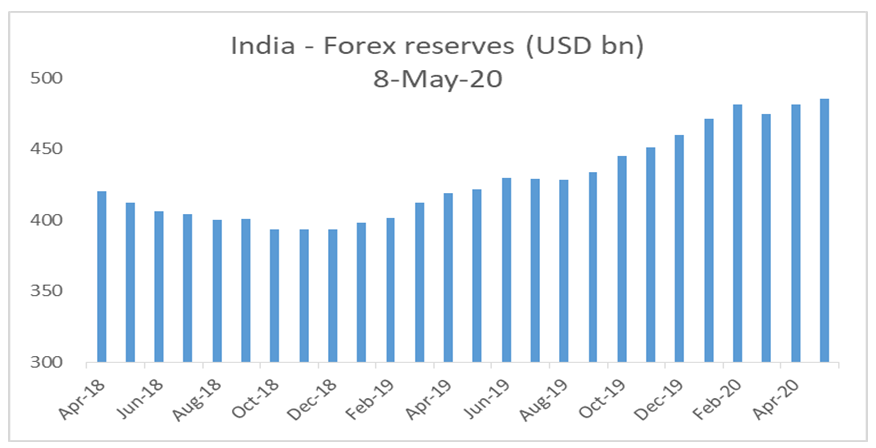 These reserves were accumulated by way of capital inflows, including borrowings. There are liabilities against these reserves. And liabilities come with an expiry date.
India’s external debt grew by 2.7x over last 12 years on higher commercial borrowings and short-term trade related borrowings. This has resulted in India’s external debt to forex reserves ratio to decline (become adverse).

While India appears to be covered when it comes to short term debt, forex reserves are only to the extent of ~80% of total external liabilities.

Meaning, if it had to pay all its liabilities today, India does not have adequate reserves to pay all of them. 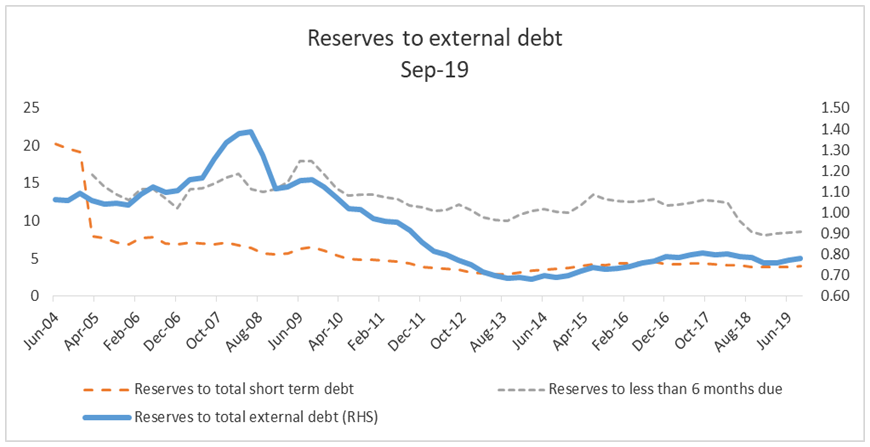 Below table gives India’s foreign exchange liabilities coverage. As at Dec-19, it had only twice as much reserves to cover its short-term liabilities.

India lost some of its forex reserves during March-20, but subsequently appears to have regained it during April and May of 2020 because of lower oil prices and trade deficit.

However, this repayment schedule brings out a vulnerability with respect to India’s dependence on short term money.

INR remains a structurally depreciating currency as of now. India remains a net importer of goods and services that are offset by capital inflows. 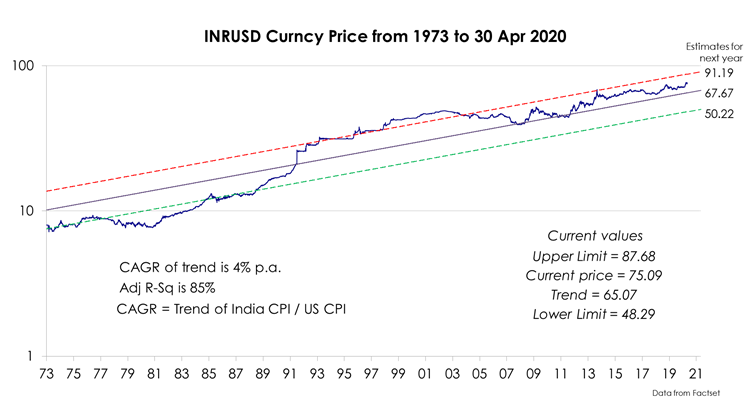 India receives large amounts of FII, FDI and NRI deposit flows to balance its net imports and build forex reserves. Large proportion of that came in post 2013/14, when the real interest rate differential was positive, and India promised a “growth story”. With real interest rates turning negative and GDP growth slowing down, capital flows especially FPI’s can be a risk. 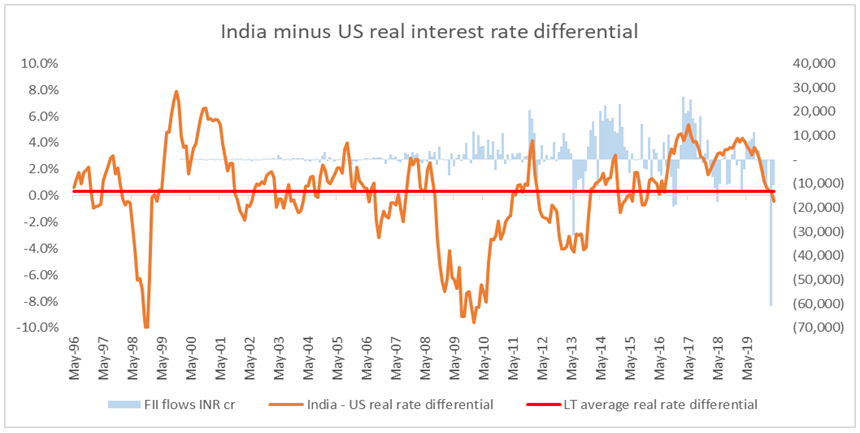 Long term real interest rate differential with US near 0% also probably tells us that over long term, India has attracted foreign capital for its high GDP growth rate potential.

This also tells us about India’s structural inflation problem that surfaces in some years. India’s inflation differential with US has stayed high at 4.4% over long term (has started to rise again now). This inflation problem is rooted in its sustained fiscal deficit. Basically, government is taking resources and not paying adequately for that from savings, resulting in inflation spurts every few years. A borrower cannot support high real interest rates to attract capital if the productivity (low) does not compensate for the high real rate!

For a trade deficit country like India, foreign capital can be attracted structurally by way of improving productivity. Investments chase improved productivity. Higher output at lower input costs. If an economy has high productivity, high interest rates, are sustainable attracting people and capital. There is some evidence of countries like Taiwan, South Korea, Thailand, etc. being able to do it and have high real rates. Maybe we will try to dig a little deeper in this area in a separate follow up piece.
But for now, we should expect things to remain the same. We may get occasional INR appreciation when some input factors aiding INR (like lower oil prices) excite market participants. But the larger trend for INR remains that of a depreciating currency. We can expect government policies directed towards attracting foreign capital to balance its foreign exchange reserves to give it.
financial flexibility, especially during a time of US$ shortage. 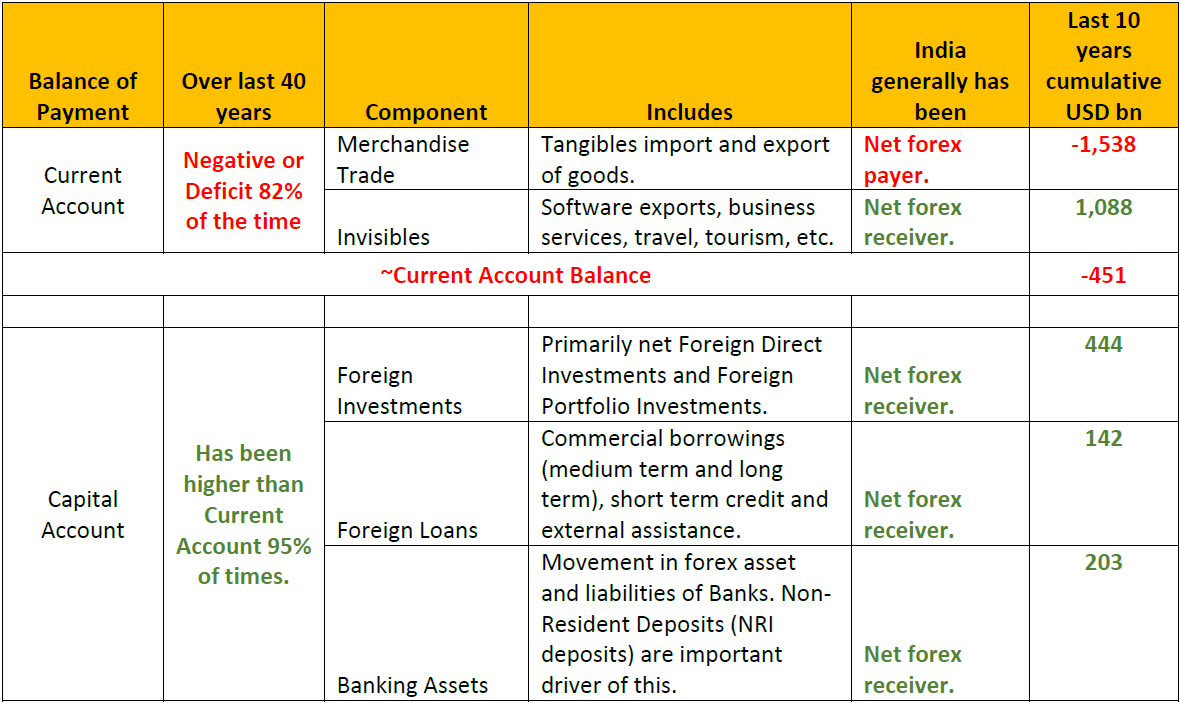