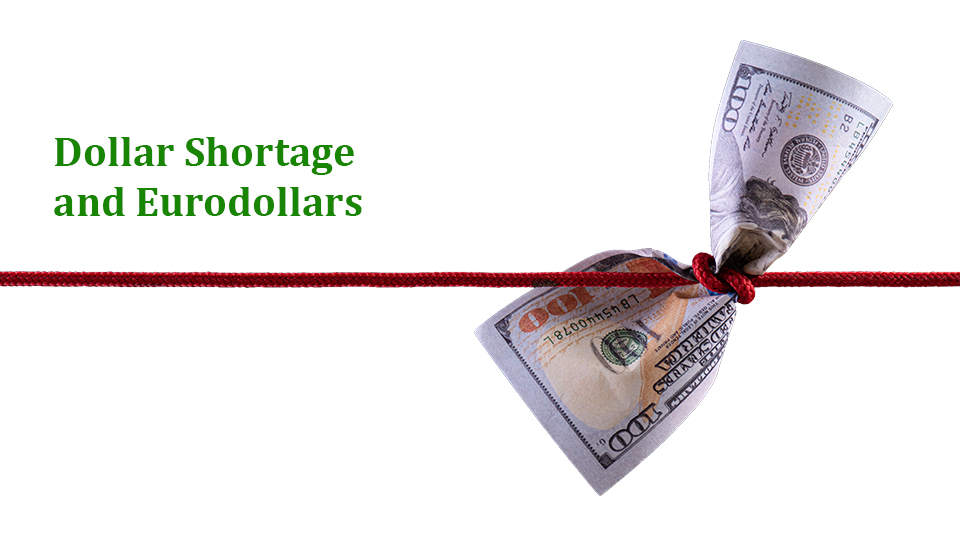 March 2020 witnessed a knee jerk reaction to the global trade and financial system coming to a sudden halt as countries all over the world imposed lockdown’s in response to the spread of COVID-19. We had suggested in our Global Macro last month how COVID-19 has acted as a pin for one of the biggest credit bubble in history, exposing already existing imbalances to manifest. We have witnessed how margin calls and the market’s “sell everything” phase led to demand for US$ to increase across the world, leading to a decline in value of most assets.

We believe market participants are doing nothing other than re-balancing themselves towards the safest asset on Exter’s Pyramid, as the probability of default risk at the apex rose. The manner in which the Eurodollar system is structured concomitant with high leverage in the system, an unwinding of positions, within a short span of time, can lead to a “shortage” of US$. 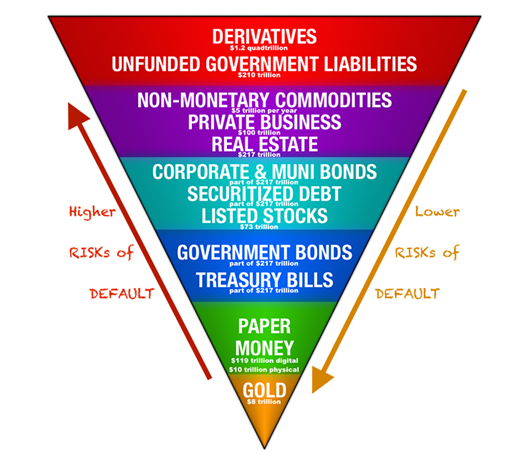 The Fed has reacted to this squeeze by announcing another round of “alphabetic” schemes (POMO, TOMO, CPFF, etc.) collectively can be termed as Quantitative Easing Round 4 (or QE4), to provide liquidity in the financial market. In the process, the Fed has expanded its balance sheet again. 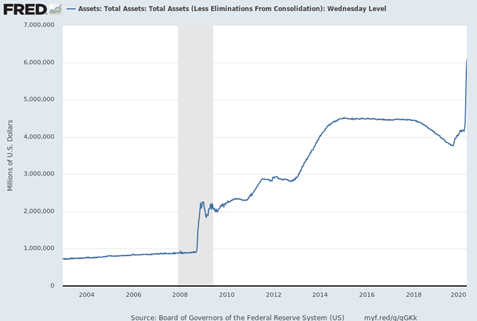 The schemes announced by Fed during the volatility we experienced in Mar-2020 are given below. 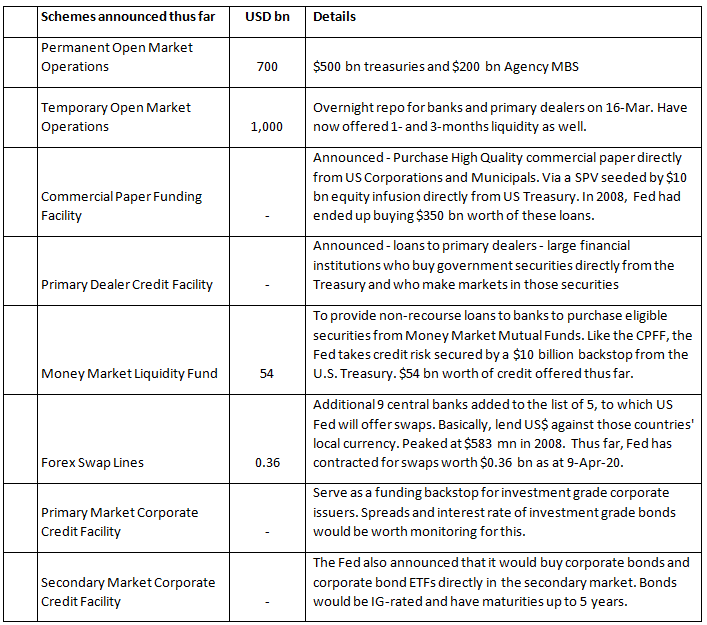 Fed’s recent balance sheet expansion of ~$2 trillion has helped global markets stabilize for the time being. However, large portion of this liquidity were targeted towards US financial markets.

There is a large non-American, non-bank US$ financial system called the Eurodollar market as well. This is where the US$’s reserve currency status is really reinforced. As per BIS, this stood at ~$12 trillion as at Sep-19. Of this, emerging market liabilities stood at $3.8 trillion. 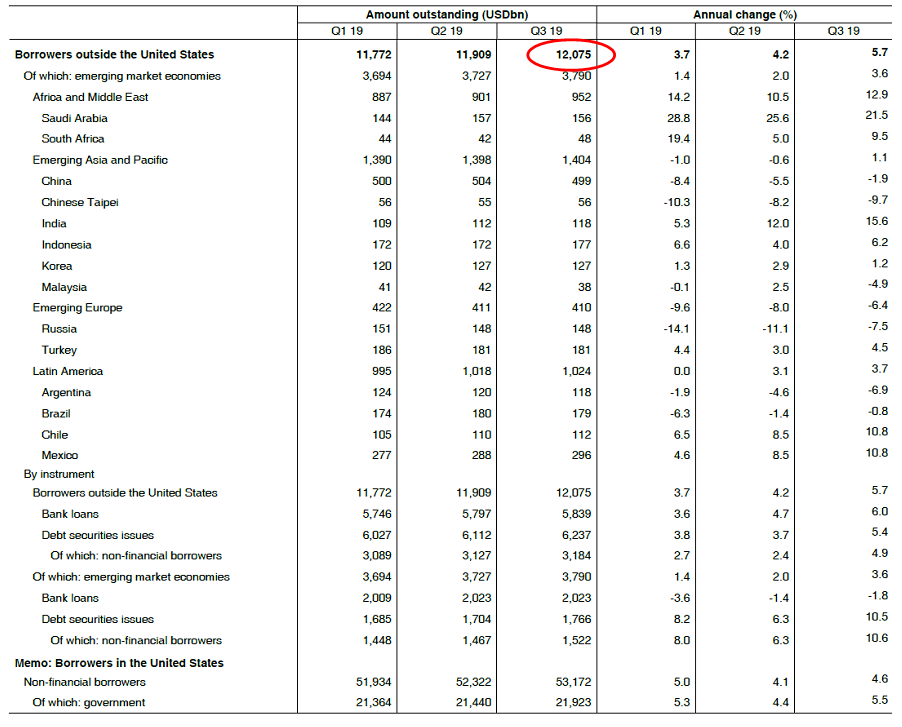 Over and above this, there are other exposure or obligations that non-US$ countries have. If we add other exposures, we get total liabilities to the tune of $55-60 trillion as at 2018, based on data compiled by Rabobank as below. 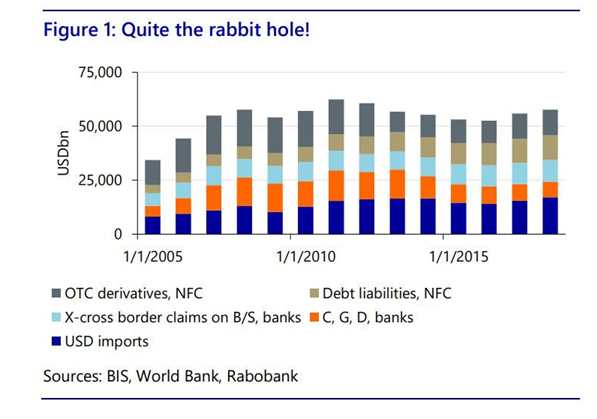 All these liabilities are floating around on the back of ~$2 trillion currency in circulation and ~$6 trillion of the Fed’s total balance sheet. Hence, whenever there are sudden credit oriented panics in the market, we see DXY (Dollar Index) rising on US$ shortages- real and perceived.

QE4 on the face of it appears to be inadequate compared to the total $55-60 trillion of liabilities outside of US, though it is always a question of perception. So, if the markets perceive the problem has been taken care of and there is no rush down the Exter’s pyramid, the situation stabilizes – until of course the next episode. Part of the initial rush for US$’s seems to have also largely been met out of foreign exchange reserves held by several countries. Total US$ held by world central banks as foreign exchange reserves stood at $6.7 trillion as at 2019. A large part of these reserves is held as US Treasuries, selling of which to US Fed as part of QE can also become a source of US$ outside of US. But liabilities are still ~10x of total reserves, indicating a large and permanent hole in the event of widespread loss of confidence in credit instruments.

Note that above is in addition to $47.3 trillion of liabilities across sectors in US itself.

Are we near end of the crisis?

The flows of US$ traditionally have come by way of US running trade deficits versus the rest of the world. For years now it has borrowed from the world (issued liabilities) and consumed at the margin by issuing liabilities. All this has been possible because of the US$’ reserve currency status.
Historically, weaker US$ is associated with higher world trade and vice versa. Higher world trade acts as source of US$ flowing out of the US, filling this permanent hole to some extent. Thus, higher global trade acts as higher supply of US$ for the world, resulting in weaker Dollar Index or DXY. 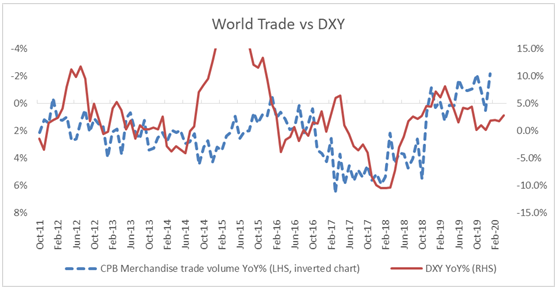 On another side, Fed’s measures have also led to excess reserves with US financial institutions. Nordea’s latest workings suggests that DXY weakness follows a rise in excess reserves. Hence, once lockdowns are over, as global trade resumes and US$ start flowing outside of US, we can witness some DXY depreciation. 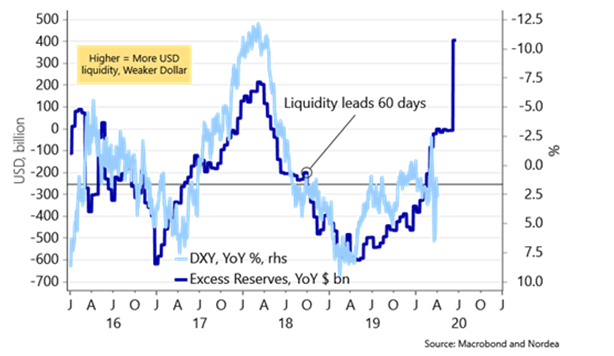 There are still questions as to when that happens and what happens in the interim. We are not even sure how much damage the whole crisis has done to world economies for global trade to pick up where we left of in 2019. We thus need to monitor how global trade picks up over the next few months and how economies rejig themselves post this crisis.

Eurodollar system works if loans and positions get “rolled over”; and not too many borrowers are forced to unwind their positions in a short span of time. With economies witnessing a major slowdown in activity, there are many instruments of questionable credit quality that market participants may not want to fund or roll over anymore.

The current crisis/panic has shown how vulnerable the architecture is. We saw above that there is a “permanent gap” in the total US$ denominated liabilities which gets exacerbated whenever there is a crisis or a panic. Foreign reserves held by countries are just 1/10th of total liabilities and can only act as temporary buffer if everyone does not want to hit the exit button at the same time.

The next chapter of the tug of war between a weak architecture of Global finance and a Fed that is determined to “do whatever it takes” and is unconcerned about unintended consequences to the concept of “money’’ is still be written, but we are sure its going to be an interesting one….

Our technical analysis on DXY currently suggests largely range bound movement between 94 and 104 for the time being. A break beyond these levels should give us a clear trend if we are entering into another round of $ crisis or that the world has come out of it. DXY remains a primary indicator for US$ liquidity in the global market.

The views expressed in this article are for educational and reading purpose only. Multi-Act Equity Consultancy Private Limited (MAECL) does not solicit any course of action based on these views and the reader is advised to exercise independent judgment and act upon the same based on its/his/her sole discretion, their own investigations and risk-reward preferences. This article and the information do not constitute a distribution, an endorsement, an investment advice, an offer to buy or sell or the solicitation of an offer to buy or sell any securities mentioned in this Document or an attempt to influence the opinion or behaviour of the Investors/Recipients.

The article is prepared on the basis of publicly available information, internally developed data and from sources believed to be reliable. Due care has been taken to ensure that the facts are accurate and the views are fair.

MAECL, its associates or any of their respective directors, employees, affiliates or representatives do not assume any responsibility for, or warrant the accuracy, completeness, adequacy and reliability of such views and consequently are not liable for any direct, indirect, special, incidental, consequential, punitive or exemplary damages, including lost profits arising in any way for decisions taken based on the said article.

It is stated that, as permitted by SEBI Regulations and the Company’s Employee Dealing Policy, the associates, employees, affiliates of MAECL may have interests in securities referred to in the information. The contents herein – information or views – do not amount to distribution, guidelines, an offer or solicitation of any offer to buy or sell any securities or financial instruments, directly or indirectly, in the United States of America (US), in Canada, in jurisdictions where such distribution or offer is not authorized and in FATF non-compliant jurisdiction and are particularly not for US persons (being persons resident in the US, corporations, partnerships or other entities created or organized in or under the laws of the US or any person falling within the definition of the term “US person” under Regulation S promulgated under the US Securities Act of 1933, as amended) and persons of Canada.