As the world stepped into the year 2020, we were hit by ‘Covid – 19’. While news agencies were predicting doomsday scenarios, stock markets seemed to be unaffected by it and kept making new lifetime highs. To curb the pandemic, nations imposed lockdowns in February and March, to which markets reacted sharply ensuing a global market crash.

The regular price action was of little help as the markets were making new highs.

Then a second set of questions arose:

Sector specific risks can be highlighted using Ratio Charts. Once the risk is identified, one can lighten the positions in the weak sectors or avoid initiating new positions even if they are making new highs.

Let’s analyse Nifty IT as an example to understand how investors could have done this.

In February 2020, Nifty IT was making new lifetime highs. Despite this, the ‘Nifty IT/Nifty 50’ ratio chart was moving sideways showing no signs of emerging strength. The divergence in new highs of the index versus the lack of strength on the ratio chart indicated that one should be cautious as soon thereafter the index corrected.

Within the next 6 months, Nifty IT Index attempted to break its previous highs in July 2020. This time there was a clear sign of strength on the ratio chart. From July 2020 to January 2022 Nifty IT Index outperformed Nifty 50 by more than 50 percentage points. 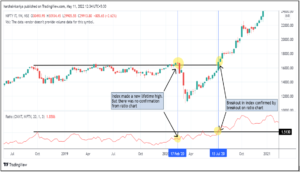 In March 2017, another instance was found when the ratio chart helped sidestep a market consolidation. Nifty IT Index was in a down trend since peaking in March 2015. The Index had formed a ‘higher high – higher low pattern’, signaling the end of the downtrend while also breaking above the trendline. All the signals were indicating the beginning of an up-move in the sector however, the ratio chart did not reflect this optimism and was making lower highs. 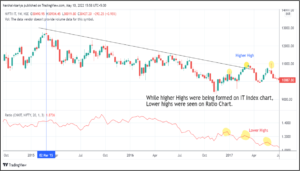 The index went on consolidating for 8 more months till November 2017! 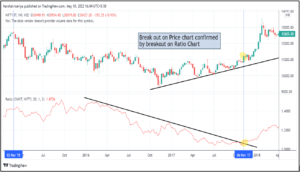 Not a Holy Grail

However, one must remember that the Relative Strength Analysis is not a holy grail. There are instances when it has failed.

In February 2013, the Nifty IT index broke out of the consolidation, which was confirmed by break above the trendline resistance on the ratio chart. The breakout failed and the index declined back to the consolidation zone.

In July 2013, the index broke above the previous high confirmed by breakout on the ratio chart. 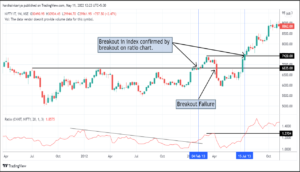 Relative Strength Analysis helped in managing trades in Nifty Metal Index in Jan 2020 when it briefly broke above the trendline resistance but there was no confirmation from the Ratio chart. The index broke the previous swing high in November 2020 with an additional confirmation of a breakout on the ratio chart. From the November 2020 breakout to January 2021 Nifty Metal outperformed Nifty 50 by more than 80 percentage points. 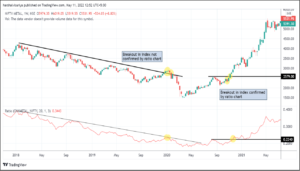 So far, the focus of the analysis was on a Macro/Sector level and one may ask how does the Relative Strength Analysis help in generating returns since one cannot directly invest in Sector indices (barring a few sectoral ETFs).

Let’s look at a similar analysis on a stock by using the Ratio Chart of the stock with Nifty 50 or its relevant sectoral index.

The IT index has been in an uptrend since forming bottom in March 2020 till January 2022. The index returned 221% from April 2020 to December 2021. However, TCS underperformed the index by more than 100 percentage points, generating 118% over the same period. Though the chart of TCS showed an uptrend, the ratio chart of TCS/Nifty IT was sloping downwards, indicating the underperformance of the stock v/s the sector index. By looking at the relative strength, investors could have possibly been ‘underweight’ on TCS or could have altogether avoided the stock in favour of some other outperforming IT stock. 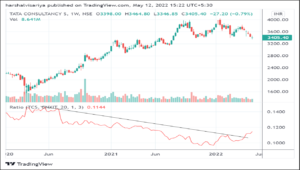 Is the IT sector going to underperform?

So far, the discussion involved past examples, so let’s look at a live example.

Since the Covid Crash, Nifty IT index has been in an uptrend. In April 2022, the index broke below the previous swing low. At the same time, the ratio chart broke the trendline support. It appears that the relative strength is warning us that the IT index may underperform Nifty 50. 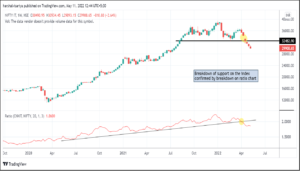 Does this warning of the ratio chart indicate a time to trim or exit our positions in the IT sector? Only time will tell… 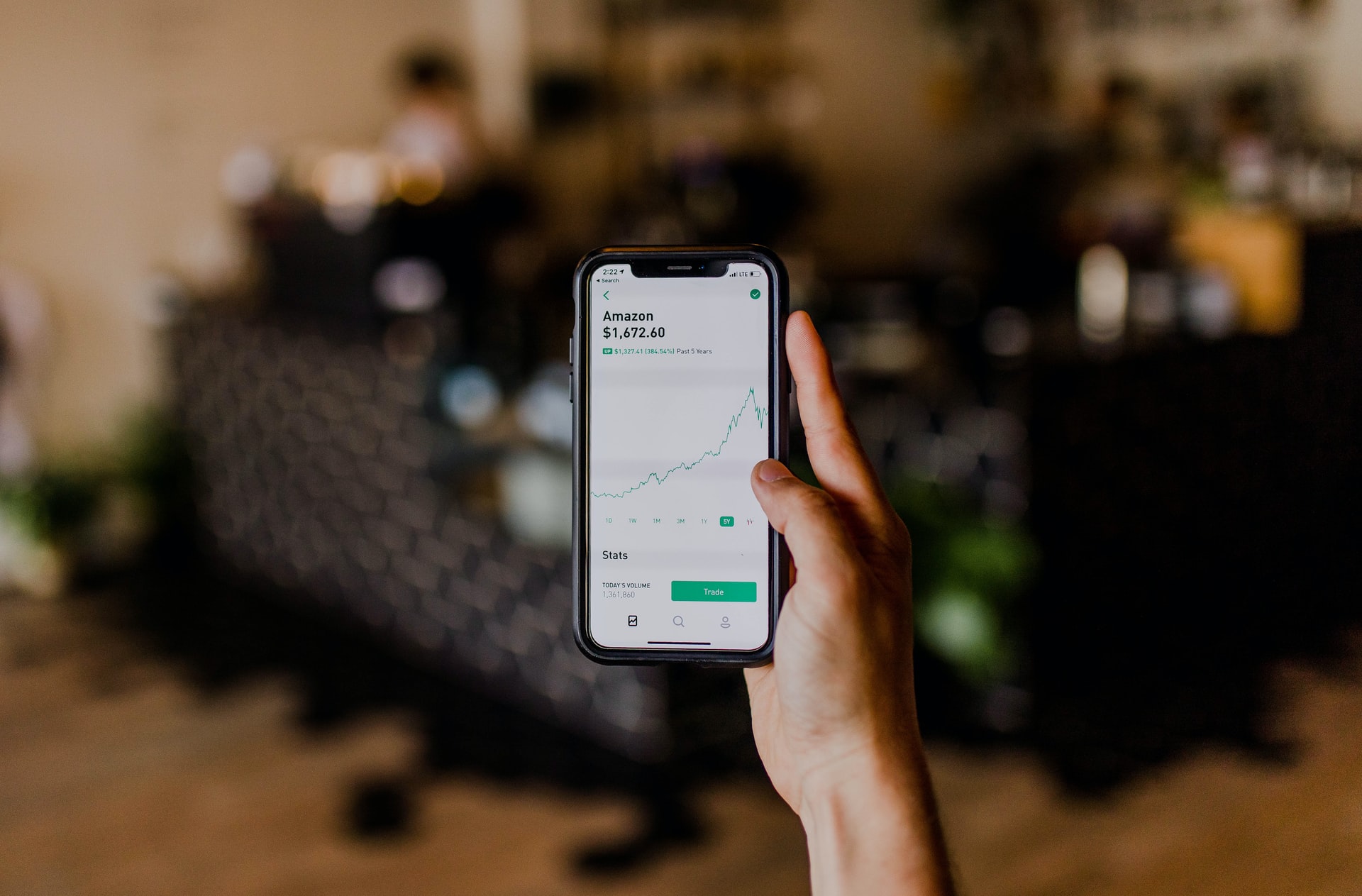 TINA (There Is No Alternative to Equities) is RISKY

As the heading seems to suggest, its indeed getting riskier (volatility wise) to continue to believe in … Continued