EBV Clusters and Their Usage – One Size Does Not Fit All 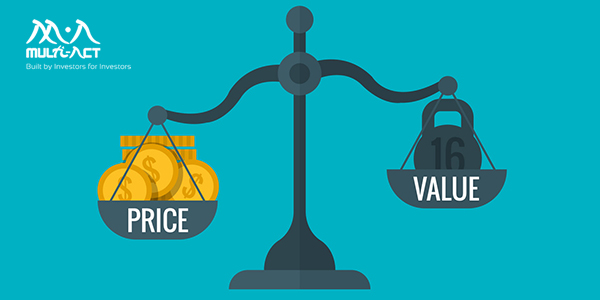 “Intrinsic value equals the present value of future free cash flow. Because the future is unknowable, you might think of intrinsic value as a range. Indeed, prices are often in that range―Mr. Market is getting things mostly right. But there are times when Mr. Market becomes manic and names a very high buy-sell price, and other times when he’s depressed and names a low price”. – Michael Mauboussin and Dan Callahan, Animating Mr. Market.

There’s more to valuation than just going by Mr. Market’s moods. Different business mandates require a reliable framework that can enable objective, evidence-based investment decisions – significantly improving the odds in the investor’s favour. Multi-Act’s Estimated Business Value (EBV) is a valuation range around a company’s intrinsic value or fair value and can be represented visually as shown below. Since the market’s behaviour is rarely linear, the valuation range shows how markets are likely to price a particular stock “generally,” during optimism or pessimism.

Of course, there can be breaches to these EBV bands (sometimes, prolonged ones). However, the EBV’s purpose is to act as a risk guidepost at any given price level rather than dictate buy price or sell price.

What is the EBV Cluster?
Depending on the company’s business, suitable valuation tools are used to arrive at this general view. These multiple valuation tools actually represent perspectives about a company from different vantage points. Depending on the market situation, one vantage point may gain prominence over the others. When viewed as an aggregate interplay of these vantage points, the EBV tries to lay down probabilities of getting rewarded at each price point vs. the downside risk that an investor might be assuming.

Let’s take the example of a newspaper company (let’s call it HNP Ltd). This example is from the perspective of an investment mandate that wants to invest in good quality businesses with a 3-5 years’ time horizon. In the case of HNP Ltd, based on our assessment of the company’s business and moat (or competitive advantage) assessment, we have used the following valuation tools to arrive at its Estimated Business Value: How to Use the EBV Cluster to Make Decisions

The latest results from two quarters suggested no clear trend in the company’s revenue and earnings growth. Consensus EPS – A consensus estimate is a figure based on the combined estimates of analysts covering a public company. Generally, analysts give a consensus for a company’s earnings per share (EPS) and revenue; these figures are most often made for the quarter, fiscal year, and next fiscal year. estimates by brokers were declining as shown in the chart below.

Technical chart suggested “oversold” The term “oversold” refers to a condition where an asset has traded lower in price and has the potential for a price bounce. conditions.

Market concerns
The key reason for the slide was rising newsprint prices owing to a clampdown in China in its bid to lower environmental degradation. This had major ramifications on the margins and earnings sustainability.
Other concerns being:

How we read the situation
All these concerns had been present with the company even before the stock price decline. They only seemed to gain prominence when the compa,ny was going through a rough patch on raw material prices.

Considering the company had demonstrated pricing power (by jacking up newspaper prices or lowering the number of pages) in the past, this seemed a temporary situation from the profitability perspective. The company retained its “Moat” status and quality criteria based on our framework.

However, the company has been witnessing a slower growth over the years.

The market’s expectations with the company’s growth appear to have remained high which is evident from sustained high P/NGV multiples till 2016-end (as seen in above P/NGV chart).

In such a case, for decision-making purposes, one may want to avoid using P/NGV distribution in the EBV cluster. It appears to assign a higher weight to a period of such disconnect (sustained high multiples with lower growth and low stock volatility). If we assign 0% weight to P/NGV, the EBV cluster gives a valuation range of: Adjusted EBV
Thus, considering raw material prices to be a temporary phenomenon as has been the case in the past and other discussions above, it did make a case for initiating the position near the low end of the Adjusted EBV back then (say 1/3rd of full weight).

Why just initiate? Because earnings and technical momentum indicators were not in our favour. We did not know how long could the stock remain under pressure given the uncertainty. We did not clearly know how long the raw material crisis would prevail. Hence, it seemed prudent to wait for more certainty and to keep some ammunition for the future.

The raw material prices issue had worsened. With stock price being hammered, promoter’s pledge shares issue also aggravated. They had to provide lenders with more shares of HNP Ltd as security. This increased the risk of higher supply of stock in the market at a time when the market was pessimistic in general – with worsening liquidity owing to the NBFC crisis.

How we read the situation
Largely a technical issue, with no major ramification on the business quality and analysis done during July 2018. With absolute margin of safety for the stock at Rs. 153 i.e. No Growth Value, it made a case for adding onto the position when it was quoting near those levels.

Raw material prices have started to soften. Pledge shares issues have normalised. Positive news came for the company when the government announced a 25% hike in the prices of advertisements published by the government.

Though consensus EPS estimates continue to remain low, the company has seen some upwards revision over the last 3 months as shown in the chart below and general news flow seems to have improved considering articles like this.

The company though continues to remain a business with low growth visibility in an industry that is facing digital disruption with promoters having pledge shares for their other businesses.

This is a live case. Where will the stock price go from here? Will it reward appropriately based on potential upside till EBV high? We are not sure of that as of now. However, this example showcases how decisions can be taken objectively using EBV framework and the underlying valuation tools, for just about any situation.

(Note that many other points are considered over and above these points to build conviction on raw material price mean reversion, gauge risk of promoter’s pledge shares coming into the market as supply and company’s pricing power and growth)

Different Players, Different Games
The above is a simplified case study for explanatory purposes and based on an idealised GRAF approach. There are different types of market participants with differing mandates. How each plays (or not plays at all) can differ.

For the same company, a very long term investor may not want to invest at all, owing to low growth prospects that the company offers as of now. A value investor might have wanted to wait for a price near that No Growth Value to buy at one shot and sit tight till the full value is realised. Or a fund manager who is benchmarked every month might want to buy the stock at a reasonable valuation (near or even slightly above the low end of EBV), upon confirmation of earnings momentum, technical momentum and other near term triggers and play it as long as the momentum continues.

The point? For each type of mandate, the EBV framework can help aid objective and evidence-based decisions. A series of such decisions can help improve the odds in the investor’s favour. This ensures recurrence of returns rather than non-repeatable “one-offs”.

Multi-Act follows such process-driven decision-making consistently, while managing funds or advising different client mandates in its bid to avoid permanent loss of capital.