Does PE Ratio Tell Us Anything About Value? 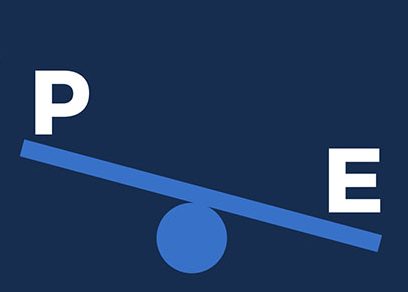 The Price to Earnings or PE ratio is a widely used valuation ratio. You would quite often hear people saying for instance, that ABC stock is cheap because it is at 10 x PE or XYZ stock is expensive as it is quoting at 20 x PE. But can someone, by just looking at the PE ratio, determine whether a stock is cheap or expensive?

Stock A in the example above is MTNL while Stock B is Nestle India. While, obviously, the stocks selected are with significant hindsight bias, the point is – a stock may not be cheap at 7 x PE and at the same time a stock may not be expensive at 20 x PE. There is a lot of information in a PE ratio that the market is trying to convey.

The value of a business is the discounted value of all the free cash flow that the business can generate in the future. Let’s say, when XYZ stock is quoting at 20 x PE vs. 10 x PE for the company ABC, essentially you would be paying more for the future of XYZ than of ABC. When the stock is quoting at a given PE valuation, the market is inherently making certain assumptions about the future of the business.

What Is the Market Thinking or Indicating Through the Pricing of the Stock?

For a stock quoting at a low PE ratio, the market is concerned about one of the following:

For a stock quoting at a high PE ratio, the market is indicating all of the following (These are mostly reverse of above):

Note the words underscored in the above points. For a low PE, the stock market might be concerned about any one of the points, while for a high PE the stock market is essentially indicating that it is confident about all the points mentioned.

If we disagree with the market’s assessment on the above points, we have an opportunity. If as an investor, we are able to find a low PE stock which does not have any of the concerns mentioned above, it could be a mis-priced stock and could provide an opportunity.

At the same time, if a high PE stock has any issues with the above points, it should raise red flags for an investor. The PE ratio is an indicator that gives us information about the market’s perception of the business. We need to dig deeper to assess before agreeing or disagreeing with the market’s perception of value, rather than just looking at a headline PE ratio to say if the stock is cheap or expensive.

While above blog focused on what the market is assuming about an individual stock based on its PE ratio, we have discussed how overall market valuation affects returns for an investor in this blog recently.

Note: There could be points beyond the ones discussed above which could lead to market pricing stocks at Low/High PE. For example – earnings could be suppressed or extraordinarily high due to the cyclicality of the business, extraordinary expenses/income. But if you would look beyond the cyclicality factor by looking at normalised earnings and after excluding the extraordinary items, the above points should hold. Sometimes, the market is not looking at earnings or the future earning potential of the business but it’s assigning value to assets that the business is holding. In such cases, the PE at which the stock is quoting might not suggest anything.